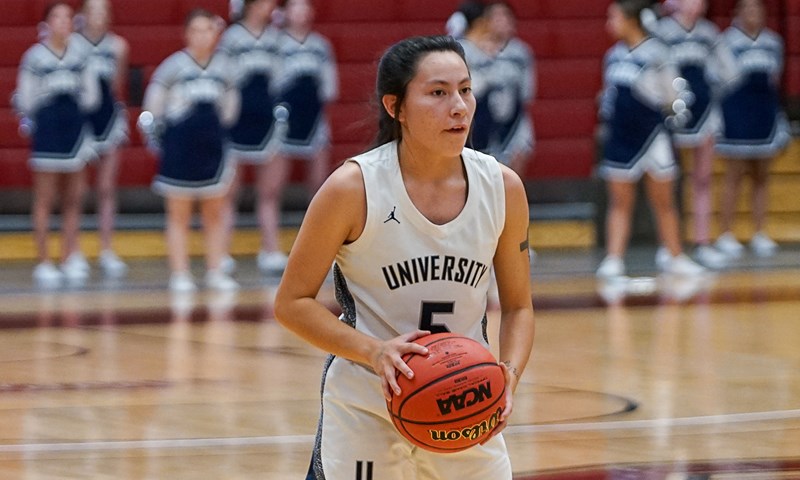 
The Class 3A state basketball tournament continued Friday night at the University of Denver. The Final Four kicked off in the evening, starting with the University Bulldogs and The Vanguard School Coursers. Later that night, the Platte Valley Broncos and Grand Valley Cardinals faced off.

The Platte Valley Broncos entered this season as a team to beat, trying to capture a second straight state title. Their season will see another shot at the title this weekend after Friday’s 52-33 victory in the Final Four.

“It’s amazing,” said Bree Bunting of Platte Valley. “We put in so much hard work and preparation during practices and games. It’s amazing to be here.

What looked like a convincing victory suddenly changed in the second quarter. Grand Valley responded to the challenge, doing their part to take care of the ball and lead the attack. When they did, they saw AbbeyRose Parker and Jaycee Pittman hitting some shots and free throws to take the lead. The Broncos suddenly only saw each other by one point until Bunting drained a 3-point shot at the buzzer before halftime.

It was more than enough motivation to get back on track.

Platte Valley kicked off another series of goals to start the second half, this time scoring the first 11 points to extend the lead to 38-22. The defense also got back on track, holding Grand Valley just four points in the third quarter and nine in the fourth to maintain its double-digit margin the rest of the night.

“We had to focus on our defense and try to stop them and then always transition on the field,” Bunting said.

Bunting led the Broncos with 23 points in the win while Andi Schissler had 12 and Brooke Bunting scored 10. Grand Valley saw Parker score 16 points to lead the team.

The win was 39 from Platte Valleyand back-to-back win dating back to last season and has been something this group has seen playing together early in their careers.

“Ever since we were little we played together on a club team,” Bunting said. “It’s been so fun to see our growth for a few years and still be able to play with the same people and have so much fun.”

The Broncos managed to beat University in the regular season and the Patriot League tournament in February. Now they will try to do it one more time to repeat as state champions.

“We have to play hard and outplay them every game,” Bunting said. “If we shut them down defensively, our attack will also sink.”


The university reached the Final Four in 2020 before pulling out in last year’s tournament. This time the team was able to take the next step, winning 52-37 over Vanguard School to advance to the title match.

“This group of girls have worked extremely hard for a number of years, and they’re kind of on point,” varsity coach Matt Baumgartner said. “Getting over that bump is great for this group.”


Postman Addison Harding had early foul trouble, so University relied on guard Taryn Kravig to pick up the offensive charge. She had three shots from behind the arc in the first half and led the team with 16 points as the Bulldogs took a slim 26-22 lead. She would go on to lead all scorers with 26 while compatriot Emry Trujillo added 10.


Harding saw more time on the floor in the second half, and the team worked to get him through the post to drive in six of his eight points.


“We are very lucky to have post players who can do damage inside, and we also have girls who can shoot the ball really well,” Baumgartner said. “When we can roll both, it’s a lot of fun. Sometimes we have to feed off one to make the other work, but it’s definitely something we love to do.


Hailey Blanchard worked as the primary scoring option for The Vanguard School and led the team with 17 points. His efforts helped the team reduce the deficit to single digits a few times before the University pulled out.


The Bulldogs are hoping for another win Saturday against a familiar league foe.


“We just have to play together,” Baumgartner said. “We have to play aggressive. If we do those two things, we should be able to compete.

Game of Loans: the Reserve Bank of Australia loses its runner-up to Fortescue’s green fund