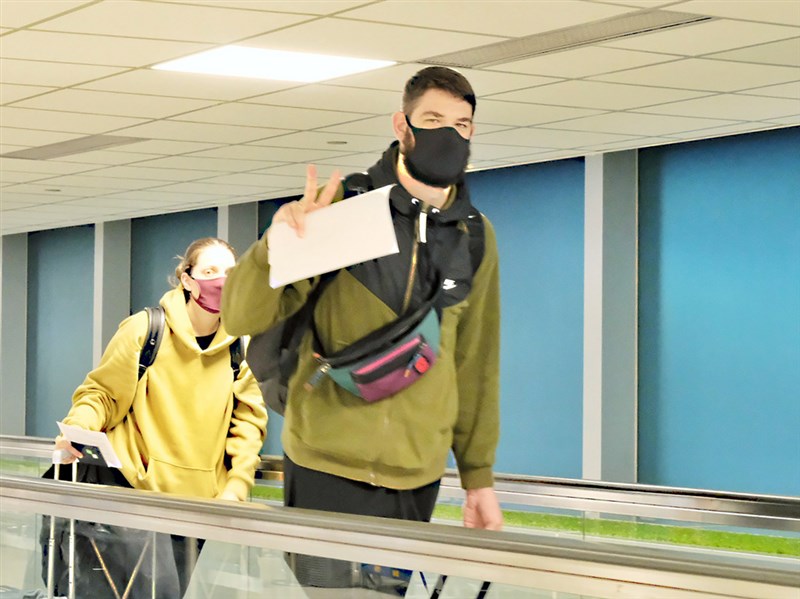 Taoyuan, Dec. 3 (CNA) The American center William Artino arrived in Taiwan Thursday evening after completing his naturalization procedures last month abroad, becoming one of the few foreigners able to retain his country’s nationality while acquiring Taiwanese nationality, which will allow him to represent Taiwan in international competitions.

The 29-year-old and his wife arrived at Taoyuan International Airport at 7:40 p.m. after disembarking from his United Airlines flight UA-871, which took off from San Francisco.

Artino did not speak to reporters or comment on his arrival and quarantined himself at the hotel after clearing arrival procedures and completing PCR testing.

Lee Yun-hsiang (æŽé›²ç¿”), deputy general secretary of the Chinese Taipei Basketball Association (CTBA) of Taiwan, said the CTBA will help Artino apply for his national ID card, adding that it is possible for Artino to recover his card before Christmas.

Under Taiwanese Nationality Law, one of the mandatory conditions for a foreign national to apply for naturalization is legal residence in the country for at least five consecutive years, during which time he or she must have stayed longer 183 days per year.

The expedited nature of Artino’s naturalization meant that he did not have to meet the standard minimum residence requirement. He also did not have to renounce his US citizenship.

The successful example of Artino’s naturalization process will attract more international basketball players who want to naturalize to play for Taiwan, Lee said.

However, the CTBA also clarified last week that Artino was recruited primarily to play for the national team, and any club wishing to sign him would have to respect him.

The seasoned veteran once played for a Taiwanese club, when he played for the Formosa Dreamers in the ASEAN Basketball League in the 2018-19 season, averaging 20.6 points and 10, 7 rebounds per game.

He has also played professionally in Estonia, Denmark and Romania after completing his college career at Creighton in 2015 and spent the 2020-2021 season in Mexico’s top professional league with Panteras de Aguascalientes, where he averaged 17 , 4 points and 8.8 rebounds per game.

Taiwan currently has two professional basketball leagues, T1 LEAGUE and P. LEAGUE +, both made up of six clubs each, and the semi-professional SBL, made up of five teams.

The statement came at a time when Taiwan has struggled to get some of its best players to play on the national team, in part because of their obligations to their clubs in professional leagues in Taiwan or abroad.

The talent shortage was evident when Taiwan barely escaped Guam in a two-game playoff in August to earn a berth in the 2021 FIBA â€‹â€‹Asian Cup, nearly ending its streak in every Cup. Asia since 1985.

Played every two years until 2017, the Asian Cup is now held every four years, but the 2021 tournament has been postponed to 2022 due to the COVID-19 pandemic.

Taiwan’s performance in the Asian Cup qualifiers led CTBA to re-focus on the national team and push for more imported talent to strengthen the national roster.

(By Wu Jui-chi and William Yen)