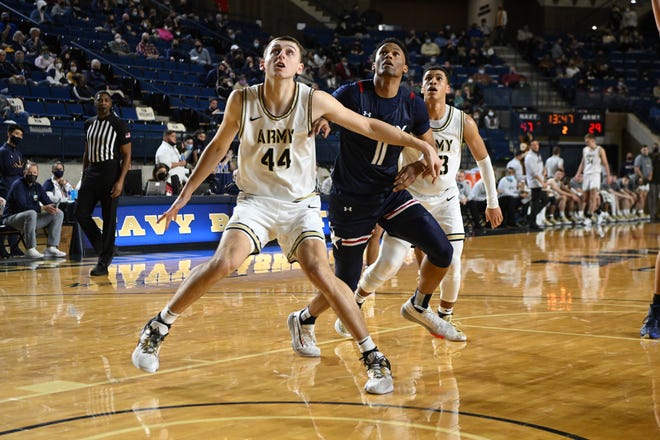 One epic victory in a career is usually enough, but coach Jimmy Allen now has two – and both on the court of his arch-rival.

Army erased a 22-point deficit in the final 12 minutes of regulation time and withstood two go-ahead attempts in the final second of overtime to beat Navy 74-73 at Alumni Hall in Annapolis, Maryland, Saturday.

“God, I couldn’t be prouder of a basketball team,” said Allen, who improves to 7-4 in Army-Navy games. “That says a lot about the resilience, tenacity and character of our guys.”

Navy defenders jumped into close defense and disrupted Army’s attacking flow in the first half, at one point taking a 27-point lead at 38-11.

“I thought we hadn’t really adjusted to the physicality of the Navy, with the way they protected us,” Allen said, comparing it to how the Army struggled with the Air Force during a battle. non-league defeat earlier this season.

“They just kind of punched us in the mouth early,” Army Guardsman Jalen Rucker said. “It was hard for us to respond, hard for us to get open shots. And we really couldn’t stop them on the defensive end.

The Black Knights increased the defensive pressure on their own in the final two minutes, scoring seven points and gaining some pride and momentum before halftime 40-18. “We kind of responded a bit and got a bit of life,” Allen said.

Army 3-point fire resumed and Navy turnovers increased. Army scored the first 10 points of a stunning 31-5 run. Late in the streak, unheralded junior Chris Mann hit a 3-pointer from left wing, converted a conventional play 3-pointer and sank a jumper from right wing to put Army on top 62-60 with 2:56 to go.

“The second half we just wanted to play as simply as possible, stick to our principles, try to keep them out of the paint,” Rucker said. “They were getting a lot of shots in the paint and then as the game went on we kept making more saves. We ended up hitting big shots and then we started cutting the lead.

Navy’s John Carter hit a 3-pointer in transition, Rucker sank two free kicks and Navy’s Greg Summers crossed the lane for a tying layup with 26 seconds left in regulation. Aaron Duhart’s shot from the right wing was high angled on the glass and tipped over the front of the rim at the buzzer.

The lead changed hands four times in the extra five minutes. Down 73-72, Army pressured the ball all over the court, Navy’s Tyler Nelson dribbled down the right sideline just past half court when he attempted to throw the ball to Summers in the middle. Mann used his long arms to grab the ball, sending Jalen Rucker on a quick break and a layup with 29 seconds left.

Summers led the lane with four seconds left, but Army’s Josh Caldwell slowed his progress and Charlie Peterson landed a clean block from behind. Half a second was put on the clock and Navy’s final lob attempt on Tyler Nelson was repelled by Caldwell and the Black Knights erupted in celebration.

“This game is just about winning individual battles and I think that’s what we did on this home stretch,” Allen said.

The mood was darker on the navy side.

“In addition to playing the first half, we played the second half exactly opposite,” Navy coach Ed DeChellis said. “Really frustrating. We took turns throwing the ball to the other team. We finished the game with 20 turnovers (15 after halftime) and they scored 30 points on our turnovers.

Mann said Army got “really aggressive” with the defensive press once his team was down 20 points.

“It’s more aggressive than usual because obviously we needed to change something and we did that,” he said. “We started to hit some shots and we managed to come away with the ‘W’ (win).’

Army hit an unusual eight 3-pointers in the second half. “We gave them open looks on the perimeter and that was our demise,” DeChellis said.

Mann hit a trio of 3-pointers and finished with a career-high 20 points. Rucker also had three 3-pointers and scored 17. Aaron Duhart scored 10 of his 13 after the break. Josh Caldwell had 10 points and six of Army’s 11 interceptions.

“Chris is so good in transition and he’s good when the game goes up and down,” Allen said. “He’s so explosive. He’s a capable shooter… we were sort of expecting him to get a little hot from age three and today is a good day for that to happen for sure.

Army plays Lehigh on Wednesday, hosts Lafayette on Saturday and travels to Loyola on Feb. 2. The Star Game vs. Navy will take place on February 12 at 1:30 p.m.