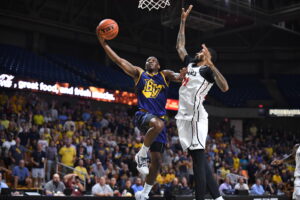 MORGANTOWN, W.Va. –The long process of building the Best Virginia roster is complete, and the WVU alumni team will meet later this week to begin preparations for the basketball tournament. The players are expected to arrive in Morgantown on Thursday and practice will begin on Friday. Best Virginia takes on WVU-Tech in an exhibition game Saturday at 6 p.m. at Fairmont State University.

A 2012 WVU graduate, Kevin Jones was instrumental in building this year’s roster.

“We live in Morgantown and we train together. We see each other a lot when the natural chemistry is already there. Guys play over the years, it’s like a family reunion,” Jones said. “We look forward to representing the state and representing WVU. It’s a good opportunity for everyone not only to earn money, but to come together as a family.

This year’s Best Virginia team is made up of former Mountaineers who have played over the past decade. Jones, Devin Ebanks and John Flowers were members of West Virginia’s Final Four team in 2010.

“We just talked more about a 2010 style team, the Final Four team – big, attacking the glass, putting it in the post and exposing the offsets. We really want to try to do that. We are long and athletic and tall. I think in all of our positions we also have tall, athletic guys with high basketball IQs. I think we have a good mix of all those things.

“I’m still trying to learn different things as I get older. I say I probably got more athletic as I got older. I’m just trying to add different things to my game while trying to refine the things that were already good for me. me. I also did well to take care of my body. That’s the main thing. The basketball part is the easy part.

In addition to Jones, Ebanks and Flowers, Juwan Staten, Jaysean Paige and Jermaine Haley are WVU alumni on the Best Virginia list. D’Angelo Hunter played at WVU in the 2017-18 season before moving to Nicholls State. Jamel Morris and Tanner McGrew both played in the Mountain East Conference. Former Ohio State forward Kaleb Wesson is the only member of Best Virginia not to have played college basketball in the Mountain State.

“Kaleb plays on the same team as Jaysean Paige. He was actually supposed to play with Marquette’s team, the Golden Eagles team. I don’t know what happened with that. He became available and at the time we were looking for a big man,” Jones said. “He was the best big man available we’ve had and he’s very good. So we were lucky to have him.

James Long is back for his second year as head coach and Morgantown’s Dave Tallman will be back as assistant coach for the third time. Joining them on the bench is four-year NBA veteran Jevon Carter. The 2018 WVU graduate recently signed a new two-year contract with the Milwaukee Bucks.

“We all got together and asked him. “I think it will be big and people will not only want to see the team, they will want to see you.” Obviously, we would love to be able to have him on the court, but his knowledge of basketball and his IQ will help the team tremendously.

Best Virginia is the No. 1 seed in the West Virginia region. They will face No. 8 seed Virginia Dream in the regional quarterfinals on July 24 at the Coliseum and Convention Center. Charleston is hosting a regional for the second year in a row.

“Last year’s reception was tremendous. As for the music, the band was there and everyone was super excited to see us play. I look forward to that or more this year. It’s something special to put on the blue and gold, whether it’s TBT or playing in college. Anytime you can do that, it’s very special.

Prior to the start of the TBT, Best Virginia will host a pair of youth basketball camps. Camps will be held at Mylan Park in Morgantown on July 17 (2-5 p.m.) and at the South Charleston Community Center on July 22 (3-6 p.m.)