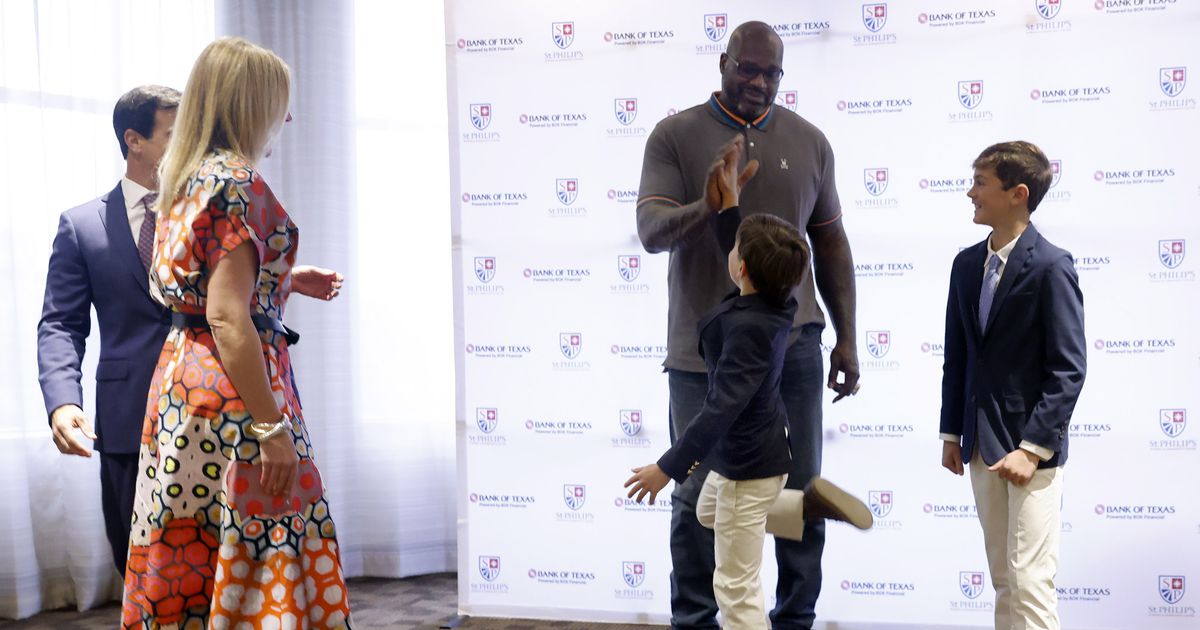 “Excellence is not a singular act”

He uses many different aliases: Shaq-Fu, The Big Diesel, Shaq Daddy, Big Fella, Shaqtus, The Big Shamrock, Kazaam (more on that in a sec), Superman.

But there’s one nickname that basketball legend and TV personality Shaquille O’Neal uses more than any other when speaking to groups of young college students: The Big Aristotle.

O’Neal — the guest speaker at Wednesday’s Destiny Award fundraising luncheon for St. Philip’s School and Community Center — shared how that nickname came about and the ties it has to his upbringing, ethic of work and, ultimately, his guidance for those in elementary and high school in South Dallas.

After being named NBA Most Valuable Player for the 1999–2000 season, O’Neal said he wanted to “say something that represented who I was.”

“Growing up with a drill sergeant dad…we always talked about practicing good habits,” he said.

Hence the (misattributed) quote from Aristotle — and a new nickname: “Excellence is not a singular act. It’s a habit. You are what you repeatedly do.

[The quote actually comes from American writer, historian and philosopher Will Durant, who offered that line as a summary of some of Aristotle’s thoughts in his 1926 book “The Story of Philosophy.”]

“I used to say to the mirror, ‘I’m the best big man. I’m better than David Robinson. I am this. I am that,” O’Neal said. “I just wanted to put that in people’s minds. That’s what I tell kids all the time, “You are who you say you are. Don’t let others say who you are.

In his half-hour chat with moderator Avery Johnson, the former Dallas Mavericks coach and longtime NBA player, O’Neal told stories and jokes about his high school days in San Antonio, his time in the NBA and his position. -basketball life.

O’Neal won the 1989 Interscholastic League Class 3A state championship while playing at San Antonio Cole. He told the crowd that his years as an Army kid in Texas were among his most formative.

When asked why O’Neal returned to complete his college education, eventually earning a master’s degree in commerce and a doctorate in education in organizational leadership, O’Neal said it was largely because of the promises he made. he had made to his mother, Lucille.

As the public praised him for his basketball skills, O’Neal’s parents kept asking him what he would do if his career ended abruptly.

“I would take home a lot of money and stuff, but I was looking at my favorite person’s face, and she was putting her hand on my shoulder and saying, ‘Baby, you promised to go back to school,'” O’ said Neal. “And I’m like, ‘I’m shooting a movie called Kazaam. “”

“I saw that movie,” her mother replied. “You have to take your ass back to school.”

O’Neal closed the conversation by asking St. Philip’s students to come up on stage and ask him questions. A student asked what was his favorite moment in his career. O’Neal told a big story about needing to call a timeout to calm down while shooting free throws against the Knicks at Madison Square Garden when he saw Halle Berry in the crowd.

“Halle Berry, look at her,” O’Neal told the ninth grader before sending him on his way.

The four-time NBA champion said he didn’t know about St. Philip’s work until he was invited to the event, but came away impressed.

“It should be a model of what others are doing in America,” O’Neal said.

Terry Flowers, the school’s principal, said ahead of the event that while the annual lunch helps the school’s annual campaign – despite the ice, this year’s crowd of 1,200 was a record – another campaign funding was also underway.

Over the next few years, St. Philip’s will raise $2 million to expand into grades seven and eight. Flowers said $300,000 has been raised so far for the effort. The school, which currently has 240 students in pre-kindergarten through sixth grade, will add about 15 more students per class once the expansion is complete.

About half of St. Philip’s enrollment receives tuition assistance to attend the private school, which has – on its own – been successful, with 100% of its graduates also earning a high school diploma and 93 % of its graduates attending university.

[Lyle and his wife, Lottye, are financial supporters of The Dallas Morning News’ Education Lab.]

Along with Roland Parrish and Bill Lively, Lyle served as co-chair of the school’s successful $50 million capital campaign six years ago.

The DMN Education Lab deepens coverage and conversation about pressing education issues critical to the future of North Texas.