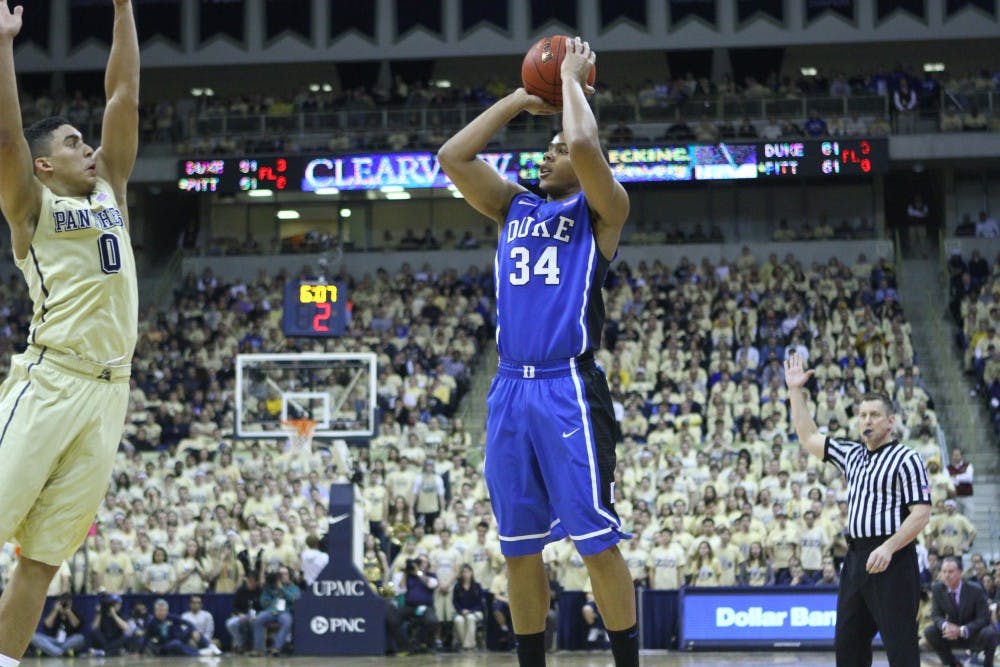 The Chronicle spoke to former Duke men’s basketball player and 2010 National Champion Andre Dawkins to ask some questions about his playing career, new head coach Jon Scheyer and head coach Mike Krzyzewski. Dawkins played Duke from 2009 to 2014 and had a brief professional career before moving on to media.

He is now the host of Dawkins on Duke, one of Jeff Goodman and Rob Dauster’s college basketball podcasts Field of the 68 Media Network.

The interview has been edited for length and clarity.

The Chronicle: What did you like most as a player about playing at Cameron Indoor Stadium?

Andre Dawkins: Probably like they’re always with you no matter the score. Whether we won or lost, whether it was a close game or we got killed, the energy was always there. The fans didn’t leave early and abandoned us. So, probably still supporting no matter what.

TC: What went through your mind against Michigan State in 2011 when you scored 26 points in the game that gave Coach K his 903rd win to overtake Bobby Knight?

AD: This game was a lot of fun. Obviously, winning is always good, playing well is good. But it was a lot of pressure on us. I remember before we got up there, after our last meeting or movie shoot before we got ready to leave [Steve Wojciechowski] let the coach leave the room and he basically told us not to mess it up. So it was a bit of pressure. Obviously there are tons of people up there, it’s ESPN and it’s at MSG. But it was a lot of fun and I’m glad I got to be a part of this game.

TC: Have you ever seen yourself entering the media when you were a player?

AD: No, not really, honestly. The podcast kinda came out of nowhere. Jeff Goodman, who runs the entire Field of 68 network – watch the podcast everyone’s listening to, Dawkins on Duke, shamelessly taken – but yeah, he just called and said, â€œHey, you want to do a podcast on Duke? And I was like, ‘I guess. Sure.’ So it kind of came out of nowhere. And it’s actually a cry to Jon [Scheyer]. Jeff reached out to Jon. And Jon gave him my name. This is kind of how it happened. Jon put me on it and it was a lot of fun.

TC: Do you see yourself becoming a coach in the future at any level?

A D: I’m actually going to be working with a local high school team this coming season, I’m going to help out like a friend of a friend. We go back to the days of the AAU. So it should be fun to look forward to that. And who knows after that, obviously there’s a diet change coming to Duke and I love Durham. I would love to come back, but I’m not going to bomb Jon as he tries to make the transition to become Duke’s head coach. If the opportunity presented itself, I would definitely come back. But for this year, I’ll be in high school to help them. And you know, I hope that doesn’t completely discourage me from becoming a coach (laughs).

Get overtime, all Duke athletics

Subscribe to our weekly newsletter organized by an editorial. Cancel anytime.

AD: I think if you look at his playing career, especially at Duke, I was obviously only a year there, but that year I’m pretty sure he dominated the country in terms of the ratio. assists / turnover. He was honestly more of a goalscorer, coming out of high school, he broke all scoring records in his school. And so that he could adapt his game and become more of a point guard, to the point where he was the best point. guard in the country that year – just shows his knowledge of the game, how he understands the game and sees it a little differently from most people. So I think that will help him be very successful as he starts his career as a head coach.

TC: Was there a specific moment when you realized how smart Scheyer was?

AD: I think I learned pretty quickly that he was really good. Probably, early pickup games – I’m just graduating from high school and think I’m really good, I was a pretty good athlete, what do I know – And yeah, just figuring out at the college level is a lot different. Jon used to kick my ass. And I’m like, man, I feel like I’m faster, stronger, but I can’t do nothing with him. I learned pretty quickly in pickup games that he was no slouch for sure.

TC: Is there anything you noticed while Scheyer was captain and leader in your freshman year that you think he can implement in his role as head coach?

AD: I think his behavior was important. And he’s never really been too excited and he’s never really been too depressed. He’s just a little bit balanced all the time. I think you can kind of see it in the way he played, especially that year. So for me in particular, I know I enjoyed having a leader like that on the team where it wasn’t a guy who was going to be all in the face and scream, scream, but lead by example, put to work and then obviously led to results on the ground. So I guess it would be similar. I don’t think his behavior has changed much in the past 10 years. I think her balanced demeanor will help, especially in those high pressure situations, to always be able to think and make the right decisions.

TC: What was the relationship between assistant coach Nolan Smith and Scheyer during your freshman year?

AD: They are first and foremost great friends, then brothers when you’re on a team, and especially these two, who keep the backcourt playing most minutes together. And then coming to a championship, you form a very strong bond and I think they still have it, both of them having been back at Duke for several years now. It’s really cool that they won a national championship together as players and both of them are on the coaching staff, hopefully they will bring another national championship as coaches. , so excited to see this dynamic and if you know Nolan, you love Nolan. I am therefore delighted to see him on the recruitment tracks. And I think he’ll connect with the rookies really, really well.

TC: What were you doing and thinking when you saw Goodman’s tweet announcing Coach K’s retirement?

AD: That’s how I found out Goodman tweeted it. I scrolled Twitter in the morning and saw it, I was like, â€œWhoa, what’s going on? And that’s not something you tweet without any source … And then I think he tweeted right after Jon took over so, that was a little bittersweet because it’s like, ‘Coach [K] is retiring, “which obviously at one point had to happen, but just then it kind of hit you:” He was the face of Duke’s basketball, that’s why everyone really cares about Duke’s basketball “after doing so much with the program over 40 years. But then knowing Jon was taking over. I was excited for it and I texted him, and I wasn’t trying to ask him a bunch of questions, so I just sent him eye emojis and he sent it back to me. So we kind of understood each other that way. So I was just sitting around home. â€And then I had to jump on the podcast and do a quick reaction with Jeff.

TC: Is there a specific Coach K story that comes out in your head since your time at Duke every time someone asks you about Coach K?

TC: What has the Brotherhood meant to you?

AD: It’s really one of the coolest things because you bond with guys you’ve never been on the pitch like I’ve never played with Gerald. [Henderson] and this is my guy. And I feel like it comes out a lot in the podcast. A bunch of guys I talked to, they never coached me, I never played with them or anything like that. Even coming back to look like a Tommy Amaker, Kenny Denard. Guys like this who are from another era in Coach K’s tenure, but you still have that connection and I feel like it goes really well when we talk to each other and share similar experiences over the course of four. decades of Duke basketball. So it’s really a unique thing and K Academy is back this year, in a few weeks, so I’m going to be back and really looking forward to seeing a bunch of guys. It’s super unique and I’m super grateful for it just because of the bond you are able to form with a bunch of guys on the Shared Experience and Duke basketball.

TC: Do you have a special message for the Duke devotees?

AD: I’m excited for this coming year. I think the team is going to be really good. I know it will be a little bit of pressure for them with Coach last year, but I’m delighted with what they have in store and the fans’ feedback and hope to be able to attend a few games and see them in person. I’m just excited and I think this team has a lot of potential so I can’t wait to be this season.

Max Rego is a junior and sports editor at Trinity for the 117th volume of The Chronicle.

Jake Piazza is a junior and sports editor for Trinity’s 117th volume of The Chronicle.