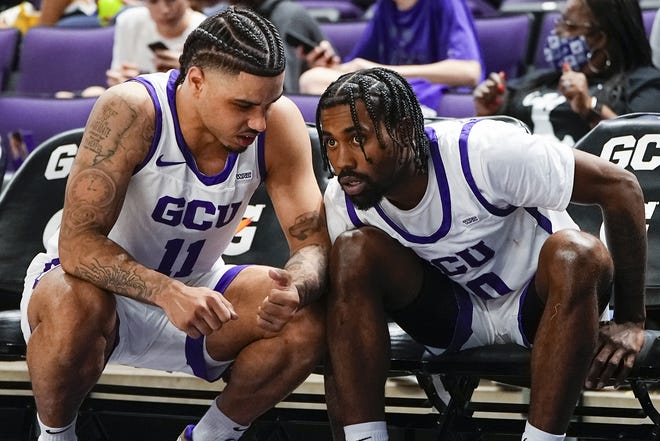 GCU men’s basketball appears to be returning to NCAA tournament

It’s like having two conferences in one this year with the extended Western Athletic Conference.

But coach Bryce Drew, in his second season leading Grand Canyon men’s basketball with an all-new system, made sure he took it upon himself to be ready for the increased competition in order to participate in a second consecutive NCAA tournament.

He had to make sure Jovan Blacksher Jr. got help in the backcourt.

To verify. He took care of that with the addition of Holland Woods II, which moved from Portland State to Arizona State and is now at GCU.

He had to make sure the Antelopes didn’t lose the rebound advantage.

To verify. He took care of it by bringing in the 6-foot-9, 255-pound forward Yvan Ouedraogo and Aidan Igiehon 6-10 and 245 pounds. Ouedraogo, originally from France, transferred from Nebraska. Igiehon, who had little playing time last year due to an injury, has arrived from Louisville.

Ouedraogo was impressive in the resounding victory over western New Mexico, attacking glass.

Igiehon’s last game was on December 9, and he didn’t play many minutes in his first two years at Louisville. But there is another great presence on the glass. He was away all summer after surgery while recovering from an injury.

â€œWe try to get every minute, every rep to find their game,â€ Drew said.

It could be a good rebound team with hard work. Gabe McGlothan, who was an energizer on the bench on the glass last year, will once again provide that hustle and bustle, the ability to bounce off the offensive end and keep possessions alive.

Senior forward Taeshon Cherry, a 6-8, 225-pound transfer from ASU, can stretch the ground with his 3-point hitting ability.

â€œIn training it’s really physical with the guys taking the rebounds,â€ said Drew. â€œIt will have to be a big part of our identity this year.

â€œWe’ve brought in some physical players that we’re comfortable playing with. The big problem for us will be bouncing. We’ll have to play really hard to get 50-50 balls and bounce back.â€

A faster team that will shoot quickly and smash the boards to try and clean up missed shots is what Drew is counting on his season to fight New Mexico State, which is favored to win the WAC by coaches and the media in preseason. polls.

But it won’t be just the Aggies who will be the Lopes’ biggest concern to return to March Madness.

Next year, Southern Utah leaves the Big Sky for the WAC.

It remains to be seen whether the new additions will transform the WAC into more than just an automatic team-bidding league or whether there might be a berth in general out of the conference.

But the Antelopes believe in them, sensing the connection from summer training.

The chemistry of the Blacksher-Woods backyard has a chance to be special.

In a resounding victory over western New Mexico, they both led the offensive at times, preparing each other for open fire.

â€œWe’re deep, we’re a deep team,â€ said Woods. â€œAny guy, regardless of the lineup, whether he starts or not, can play well. It’s positive for a good team.

Drew will have to figure out how to utilize all the talent on board when the regular season kicks off Tuesday at 7 p.m. with a home game against Grambling State.

The backcourt is solid with 6-3 second-year Chance McMillian capable of making an impact when he’s in the game. He was a key player in the home stretch and in the WAC tournament last year for the Lopes with his defense and ability to knock down tough shots.

Freshman Jalen Blackmon might be ready to contribute now. The 6-3 goalie from Marion High School in Indiana is explosive, shoots the ball well and finds the man open with his ability to create from the dribble.

And Jayden Stone and Liam Lloyd both return, hoping to break the rotation.

â€œWe love the versatility of the guards so we can change who brings it up,â€ Drew said. “I think they do a good job sharing the basketball.”

January 29: in the state of New Mexico, TBD

February 23: in the state of Chicago, to be determined

DWU MEN’S BASKETBALL FALLS IN EXTENSION AT THE PENTAGON