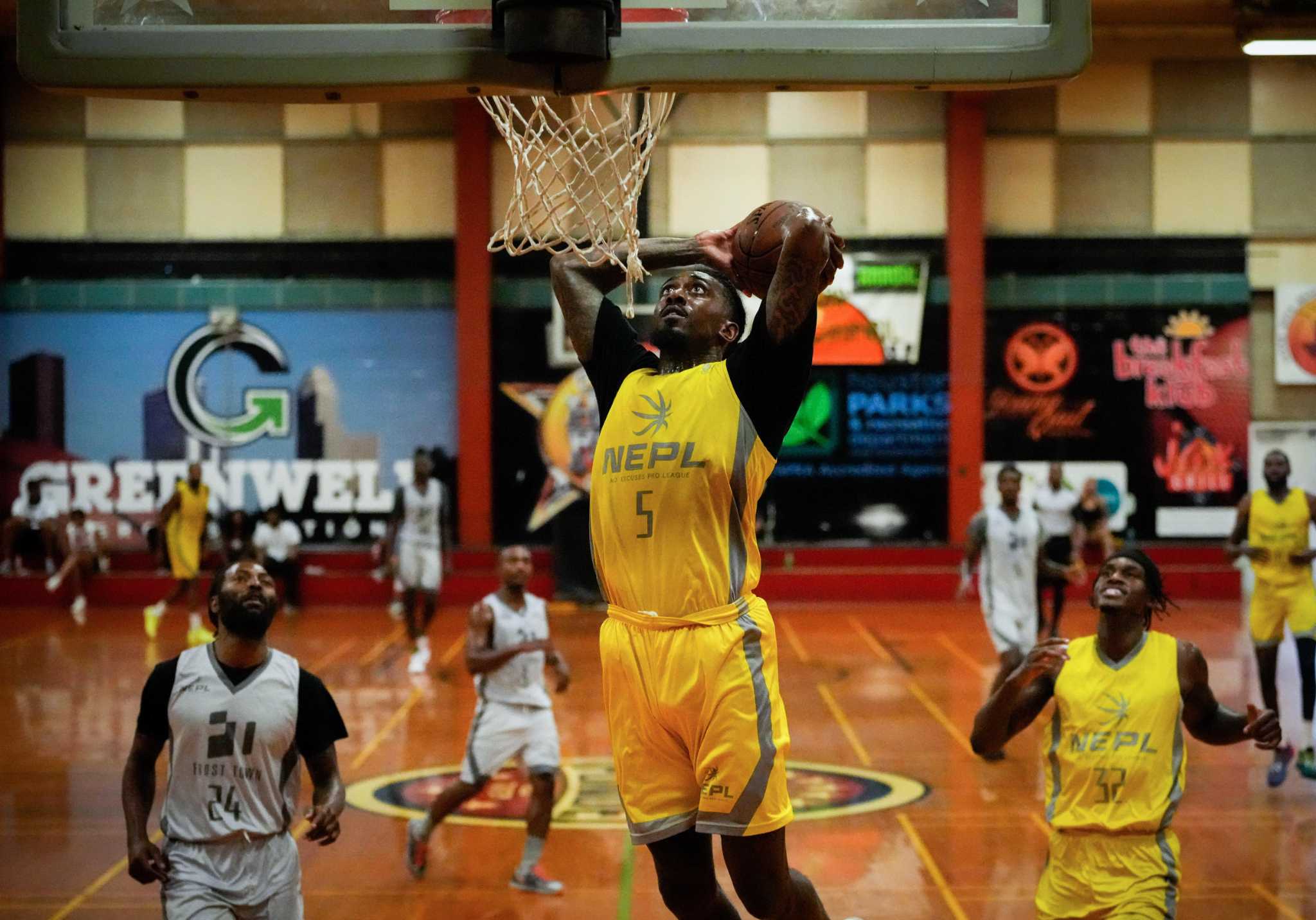 It’s the middle of the NBA’s offseason, but at a small gym on the shores of Buffalo Bayou near downtown, professional basketball players are still getting buckets. Utah Jazz forward Jarred Vanderbilt warms up in a basket at the side of main court, while former Rockets player Danuel House Jr. watches a fast break unfold from the baseline.

The game between Frost Town and Mob Ties has all the trappings of an NBA competition, but with a few key differences. There are dunks and hard fouls, yes, but there’s also a DJ in the corner spinning trap music, and a live announcer providing both play-by-play analysis and color commentary. on the speakers. Most importantly, perhaps, participation in this game is free.

The Fonde Recreation Center has been the beating heart of Houston basketball for decades, and if games here feel more like professional matchups than pickup games, that’s because they are. Many Houston No Excuses Pro League players play professional basketball overseas or in the NBA, and the league gives them a way to stay in shape while they’re home for the summer.

For local Houstonians and college players who haven’t yet made the leap to the pros, Fonde is a place to hone their skills and prove they can hang with the best in the game.

“This place is a breeding ground and it provides a safe and competitive atmosphere not only for local talent, but also for guys chasing their dreams through different avenues, whether it’s streetball, college or whatever,” said Casey Williams, a former player. and coach who is commissioner of the professional and amateur summer league

“You want to face the best competition you can find,” Williams said.

Fonde has hosted the city’s best runs, or pickup games, since the 1960s, but it really made a name for itself in the 1980s when Rockets Hall of Fame center Moses Malone faced a young Hakeem Olajuwon, then a college student. of Houston. A mural of Malone is painted on a wall in the Fonde gymnasium near a plaque bearing his famous quote: “You ain’t done it ’til you’ve done it at Fonde.”

In the years since, summer pro-ams — leagues where professionals play with and against top amateurs — have continued to grow in popularity in cities across the country, with competitions like the Drew League in Los Angeles regularly attracting NBA Hall of Fame players to match. against streetball legends and college stars. Houston’s competition, the Nike Houston Pro City League, was no different.

Andre Potts, 30, who is media director for the No Excuses league and plays on the Competitive Choice team, first stepped onto the Fonde court in 2011. During his early years in the league, the young guard, who was playing at McClennan Community College in Waco at the time, suddenly found himself up against Rockets stars such as James Harden, Dwight Howard and Patrick Beverley.

“At first it’s like ‘whoa,’ but once you get used to the environment, you realize it’s just basketball at the end of the day,” Potts said.

“I’ll be honest, James Harden is everything you see on TV, he really is,” Potts said, referring to the tight ball handling and three-step back that made Harden an MVP. of the NBA. “I saw Patrick Beverley look like the pros just started playing basketball,” he said.

Williams’ nonprofit, the No Excuses Foundation, took over the pro-am in 2016 and renamed it No Excuses Pro League. This year, it added a women’s league to the competition, which also includes Houston natives who have gone overseas to play professionally.

Anacia Wilkinson, 24, was a standout forward at Atascocita High School before leaving to play for Tennessee Tech University. After playing professional ball in Germany last year, Wilkinson wanted to work on the legendary pitches in his hometown before heading to the Czech Republic next season.

“There were a lot of great basketball games at Fonde, especially on the men’s side, so (it’s nice) to be part of that history and that environment,” Wilkinson said. “It’s our first year, but with the amount of talent we have in these teams, it’s a very good starting point.. And next year it will be even better.

Because Fonde attracts so many professional players, it’s also the ultimate showcase for local amateurs like Lorenzo “Shabooty” Phillips, a former high school standout Jack Yates. If the 25-year-old Phillips was afraid to face the pros, he certainly didn’t show it – and with good reason. Heading into the playoffs on Sunday, Phillips led the league in points.

“It’s good to see my hard work paying off,” Phillips said with a smile. “Whatever you do when you train, in your spare time when no one is around, it will eventually show.”

Dozens of people came to Fonde on Sunday to watch the first games of what will be a playoff week for the No Excuses league.

Roster rules at pro-am are loose, in that NBA players can usually find a spot on a team if they want to play on any given day. But even an established pro like Vanderbilt can’t always get special treatment. He had been warming up for Frost Town, but a few minutes into the game he suddenly appeared on the pitch wearing the other team’s uniform – Frost Town’s coach told him to change teams as he feared that Vanderbilt would cautiously dispose of his team. built chemistry.

Frost Town eventually beat Mob Ties in a match that went to the wire, but there were handshakes all around after the buzzer sounded. Mob Ties star Johnathan Motley, a Houston native who played for several years in the NBA before moving to play overseas, said all of the players have known each other since childhood.

He recently finished playing for PBC Lokomotiv Kuban, a team based in Krasnodar in southern Russia, and was on his way to a EuroCup MVP campaign when his side were kicked out of the tournament in March after Russia invaded Ukraine.

“It’s great to be home after a long season,” said Motley, who attended North Shore Senior High School. “It’s fun to see all these guys I’ve known since high school, we grew up playing against each other.”

The loss reminded us that even with NBA talent on your team, basketball is a great equalizer.

As Phillips says, “when we step onto the pitch, we all bleed the same.”