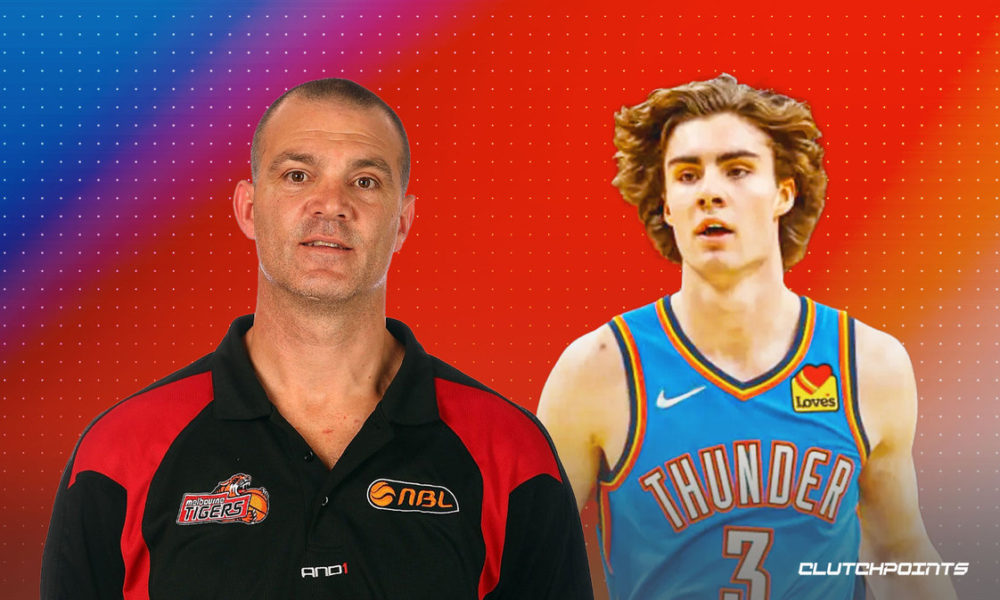 Josh Giddey is a stellar hooper who has been an absolute baller this season. In this article, however, we take a look at Josh Giddey’s father, Warrick Giddey.

That shouldn’t come as too much of a surprise to fans watching the 19-year-old before he came to the NBA. The Aussie wonderkid was already showing huge potential in his homeland with the Adelaide 36ers. The then 18-year-old didn’t look out of his depth at all playing against seasoned veterans in the NBL’s physical style of play; in his only season in the Australian league, Giddey averaged 10.9 points, 7.4 rebounds and 7.5 assists.

But did you know that Josh Giddey is actually a second generation talent? Not only that, his entire family is made up of ballers. His mother, Kim, played professionally for the WNBL’s Melbourne Tigers, while his sister, Hannah, currently plays college ball for the Oral Roberts Golden Eagles.

However, in this piece, we will be talking about Josh Giddey’s father, Warrick Giddey. We’ll take a look at his amateur and professional career, his post-basketball adventures, and other interesting anecdotes. The man who stood alongside Josh Giddey when he was drafted 6th overall was quite a player himself. Warrick Giddey was a 15-year veteran of Australia’s National Basketball League.

Warrick was born in the village of Coledale, New South Wales. He started playing basketball when he was a junior in the Illawarra high school basketball program. He played as a striker, a position he retained throughout his career.

For his efforts, Wazza received a scholarship from the Australian Institute of Sport in Canberra. Unfortunately, his college numbers are not available online. What we can tell you is that he must have been a strong fixture for the program’s state league team, as he would be making his NBL debut soon after. He would join and play for the Illawarra Hawks at just 19 after a unique college career.

His NBL career began in the 1886-87 season, in which he averaged 3.7 points, 3.7 rebounds, and 0.9 assists. He scored 3 points in his first game. It was also during this time that he played for Australia’s Boomers under-21 team.

Warrick’s tenure with the Hawks was short-lived, however; he only played 2 seasons for his hometown team before moving to Melbourne and playing for the Tigers. Now named Melbourne United, the Tigers are one of the NBL’s all-time great franchises.

In his first season with the Tigers, Warrick’s minutes and stats increased dramatically. From just 13 minutes per game at Illawarra, his playing time has increased to 29 minutes in Melbourne. Meanwhile, his tally stats went from 3.4 points, 3.1 rebounds and 1 assist to 6.1 points, 7.5 rebounds and 2 assists. Warrick’s first season also saw his team earn a Playoffs berth for the first time in franchise history; in addition to strong performances from Giddey, they were greatly helped by the arrival of Australian basketball great Andrew Gaze, who averaged 36 points that season. The Tigers 17-10 were eliminated in the first round by the Sydney Kings.

This season was the start of his best three-game scoring streaks, averaging 6.3 points to go along with 6.1 rebounds and 2.6 assists. His team also made the playoffs the entire streak.

In the midst of that, Giddey was actually part of one of the most memorable games in NBL history. Facing his former team the Hawks, Warrick and his Tigers managed to outplay the competition in a remarkable 186-158 victory. Giddey contributed 11 points in what would be the highest scoring game in NBL history.

His first taste of silverware, however, would not come until his 5th year at Melbourne, in the 1992-93 season. The then 25-year-old helped the Tigers to a 16-10 record and an NBL championship spot. Fresh off a Grand Final loss the previous season to rivals South East Melbourne Magic, Giddey and star player Andrew Gaze wouldn’t pass up this time around. The Tigers would win the championship in three games against the Perth Wildcats.

Melbourne won the championship for the second time in 1997 after a historic 16 consecutive games. Once again, the Tigers were defeated the previous year by the Magic after leading by one game; they immediately picked up the Magic to claim their second chip in 5 years.

This would be the start of the team’s decline, with many playoff heartbreaks for Giddey before the 2000–01 season. Here he would only play four games and score no points due to injury.

He would return for one final run in the 2001-02 season, in which they would finish 6th in the standings. Giddey would officially retire after a semi-final loss to West Sydney Razorbacks.

The striker’s number 6 is now suspended at the John Cain Arena, now withdrawn by the Melbourne Tigers.

What is he doing now? He currently runs the Melbourne United Community and School programs. He was also a United assistant manager.

Warrick Giddey is a big and household name in NBL basketball and shouldn’t just be known as “Josh Giddey’s dad”. Nevertheless, Josh is also about to make a name for himself, on a much bigger stage. Kudos to Warrick for mentoring a potential NBA player.