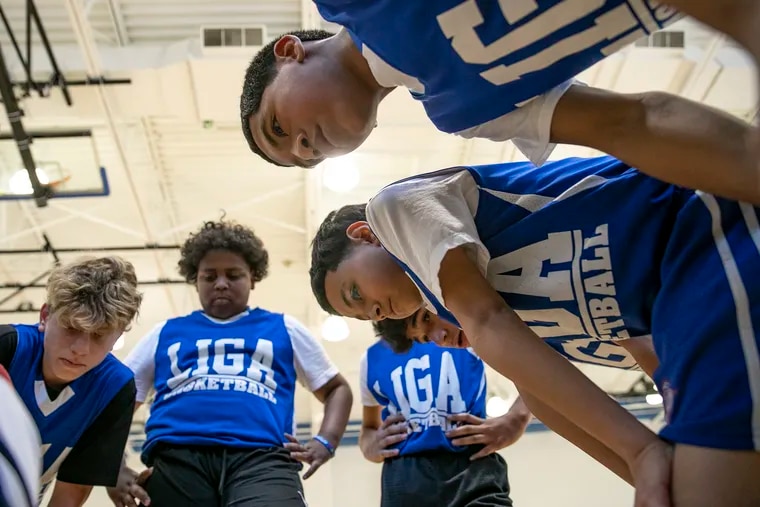 Pat Croce was watching Philadelphia’s Puerto Rican Day Parade in the fall of 1999, when he called Councilman Angel Ortiz. Croce, then the popular 76ers president, hadn’t known until then that the city had such a vibrant Puerto Rican community. He wanted the adviser to tell him how the 76ers could help.

“Angel’s first words that came out of his mouth were that we need to get these kids out of the corners. They need a basketball league,” said Raymond Alvarez, who was then working as a legislative aide for Ortiz.

That league – La Liga Del Barrio – is still operating more than 20 years later and serving Philadelphia’s youth with the financial backing of the 76ers. They run programs nearly year-round and have served approximately 10,000 children—primarily from the city’s Latino population—in nearly every neighborhood from the far northeast to southwest of Philadelphia.

And now they need a gymnasium.

La Liga Del Barrio, which is run by Alvarez and other volunteers, operates without its own building as it runs its leagues by acquiring gym time from schools or community centers. A gymnasium of their own, Alvarez said, would allow the league to serve even more kids.

“We grew, grew steadily. The problem is that we run into these hurdles of simple basic logistical things to keep a league running smoothly with the facilities that we used,” Alvarez said. “A gym would remove the obstacles, the logistical nightmares that cause us to cancel games at the last minute. Additionally, we want to grow to be more than basketball. We want to offer other sports.

The league is hosting a gala Friday night at the Felt Factory in Juniata Park to kick off a fundraising campaign in hopes of securing a plot of land to build a gymnasium. They received one of their first contributions earlier this month when Alvarez and Ortiz visited Croce’s home in Bucks County, hoping to film a video of Croce to play at the gala. Instead, they left with $25,000 and a challenge from Croce for others to match his donation.

“He really surprised us,” Alvarez said. “The first words that came out of the councilman’s mouth were, ‘You’re going to make me cry.’ I already had watery eyes. I was stunned.

La Liga Del Barrio runs a youth league from December to April, a summer league, a young adult league and launched a cross-country team during the pandemic. More children are on a waiting list in case a place becomes available. They dress the kids in sharp jerseys, hold a trophy celebration at the end of the year, and kick off the season with a draft as the kids wear costumes and dresses as they take the stage when their name is called.

Liga Del Barrio launched the league for young adults – the Alumni League – last year in response to rising gun violence in the city. Alvarez said they needed to try something to help get young adults off the streets. The eight-team league, which included many players who played in the league as children, was a success.

But first, they had to find references.

“They avoid young adult leagues because they say they cause too much trouble and that’s why they charge exorbitant fees,” Alvarez said. “We sold them, ‘Look, we’ve been doing this for 20 years and these guys who are running in the league right now are the same guys who grew up in our league. We can guarantee that you will get the same respect, behavior and representation from our league. They were hesitant but they took the opportunity and now they are part of our in-house refereeing team. These refs will tell you now that they love playing with our guys. They see something different.

The league’s name translates to “The Neighborhood League” because Ortiz, who served on the city council from 1992 to 2004, wanted the Latino community to feel like they owned the league. Not having a gym, Alvarez said, provided a silver lining as it forced La Liga Del Barrio to bounce around the city and serve kids from all walks of life and neighborhoods. After more than 20 years, the neighborhood league is ready to have a home.

“It’s bigger than basketball and it’s bigger than the game,” said league marketing director Melinda Caraballo. “It’s the community. And having our own gym would not only allow the sports to continue, but also allow that community aspect of “Hey, this is your haven.” This is where you come to get the resources you need when you need them. We want to continue to diversify, to intertwine the educational aspects and to let children know that it’s not just sport. There is a family aspect there, even if they don’t have that at home, they can get it from Liga Del Barrio.

Alvarez joined Croce earlier this year, calling with him in hopes he could attend their gala. When Croce answered, he told Alvarez that he usually ignored calls from numbers he didn’t recognize, but he was glad he answered. It had been a while since he had heard of La Liga Del Barrio.

Croce couldn’t attend the gala because he would be out of town, but he invited Alvarez and Ortiz to his house for lunch. He had a variety of Puerto Rican dishes waiting for them, and the group remembered the league Croce helped kick off with a phone call. Alvarez would soon find out that his phone call to Croce — more than 22 years after he called Ortiz while watching the parade — would help kick off the league’s next leg.

“You’re talking full circle,” Alvarez said. “It’s the same way the league started and now it comes back to Pat with a phone call. He said it was out of pure grace that he answered that call. It’s amazing.”