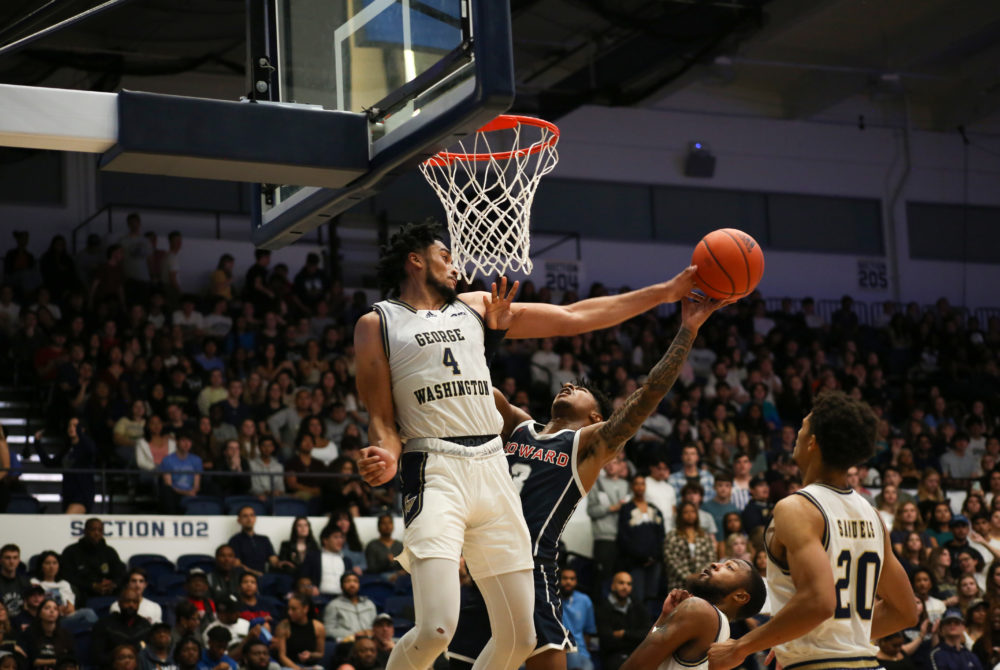 After years of sluggishness presence and fan engagement, head coach Chris Caputo and men’s basketball rocked the Smith Center again with their 85-75 victory over Howard on Friday night. Senior forward Ricky Lindo Jr. and freshman goaltender Maximus Edwards combined for 37 points and 17 rebounds en route to a victory for the Colonials.

“I’m almost speechless about the quality of the students,” Caputo said in a post-match interview. “Especially in this building, how loud it is, it’s perfect for a college basketball environment like the one we have. It’s not a cookie cutter, it’s a unique building. I think just that it’s awesome.

The game got off to a flying start, with 8 of the Colonials’ first 10 points coming from dunks, the first of which, a monstrous comeback by senior forward Ricky Lindo Jr., sent the already-buzzing crowd into a state of pandemonium.

Lindo led GW at both ends of the court all night, scoring a game-high 19 points and knocking down nine boards and smashing four Bison punches.

“I took what the defense gave me,” Lindo Jr. said.

After a back-and-forth start keeping the score at 8 points after six minutes of play, the Colonials began to drift away. Graduate guard Brendan Adams took control of the GW offense and drilled a 3-pointer to punctuate an 8-0 GW run that put the Colonials up 16-8 nearly halfway through the first half. .

But the Bisons weren’t ready to back down just yet. A dunk from sophomore guard Bryce Harris on a back cut and a quick finish from junior forward Jordan Wood forced GW to call a timeout in an attempt to stop the bleeding. Led by Harris, who finished the night with a team-high 19 points, Howard came within 1 with 4:17 left in the half.

After the timeout, neither team could gain a clear advantage and the Colonials entered halftime clinging to a 36-32 lead.

Howard came out of the gate shooting after the break, despite Edwards hitting a three for GW’s first shot of the half. Harris was particularly aggressive, scoring the first half points for the Bison on another backdoor cut and firing a huge offensive rebound before feeding the ball to junior forward Steve Settle, III, who got it. placed to tie the match at 41 points. room.

But from then on, GW hit the throttle and never looked back. Edwards, who scored just 6 points in the first half, was the star of the second, finishing the game with 18 points while shooting 60% from the field.

“He’s a talented young player,” Caputo said. “He’s got some dexterity and proprioception, knowing where you are in space, he’s got a really good feeling, he’s got it.”

Senior striker Hunter Dean was also a big hit for the Colonials in the second half, scoring 10 of his 14 points after the break. Dean, who was one of five GW players on the pitch to start the second half despite initially coming off the bench, said he was unaware of the change in the starting lineup at the time. advance.

In addition to scoring, Dean had nine big rebounds and sank all four of his free throws.

Getting to the line was key to GW’s success, as 23 of their 85 points came from the charity strip. Lindo led the Colonials in the category, hitting all eight tries.

“No matter what happens, if we’re fouled, we have to hit our free throws,” Lindo said. “These are the easiest points other than a lay-up, dunks too.”

And the Colonials did just that, hitting 23 of their 29 free throw attempts, good for 79.3%, a number tied with the best free throw teams in the country last season.

Thanks in part to Lindo and Dean, the Colonials dominated the glass all night, knocking down nine offensive boards and outscoring the Bison 39-22 overall.

“It’s definitely a trend we’re looking to continue,” Lindo Jr. said. “The whole coaching staff is focused on boxing and rebounding. I think if we bounce back we can compete with anyone so we just listened to this message and boxed and bounced today and the results speak for themselves.

The Colonials travel to Long Island, New York on Monday to take on Hofstra. Tipping is at 7 p.m.

This article appeared in the Issue of November 14, 2022 of the Hatchet.