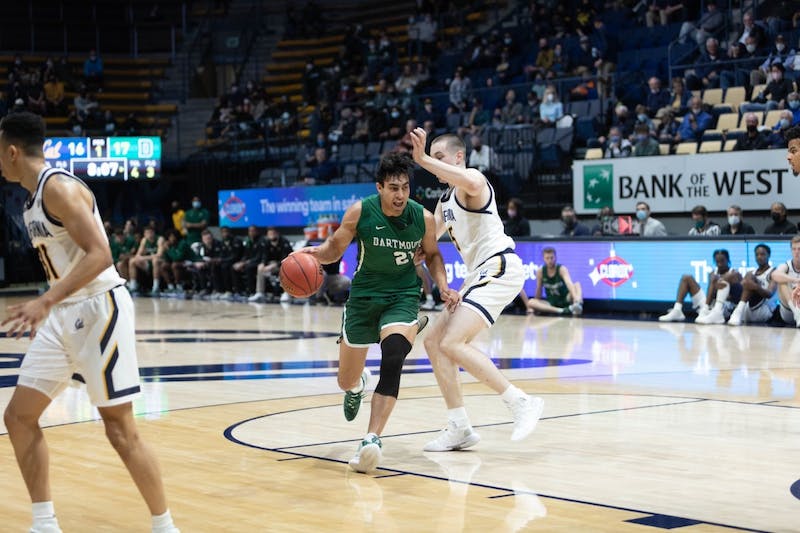 The Big Greens win over the Lions puts them one game away from fourth in the Ivy League.

The Big Green trailed for most of the first half. Columbia took an early 10-2 lead after responding to Aaryn Rai ’21’s opening bucket with a 10-0 run, but Dartmouth responded with an 8-0 run to level the score at 10. As the teams continued to battle it out, Garrison Wade ’22 sank three treys in one minute to put Dartmouth ahead at 5:26. After that, the Big Green retained the lead for the rest of the game.

“We’re not going to underestimate the opponent – you never do that,” Izaiah Robinson ’24 said. “Especially after the tough losses to Princeton and Harvard, we’re going to come in hungry, ready to perform and ready to fight and push. [for the playoffs]and I hope this will be the turning point of our season.

The Big Green entered halftime with a 35-30 lead. Neither Brendan Barry ’20 GR nor Taurus Samuels ’22 – two of the team’s top three scorers – converted before 17 minutes into the game, Dartmouth’s depth was revealed. Players coming off the bench like Robinson and Cam Krystkowiak ’23 helped the Big Green stay there in the first half.

After a competitive first half, the Big Green went 10-0 in three minutes near the start of the second. Thanks to a good early game from Dame Adelekun ’23, Dartmouth were able to increase their lead and didn’t let go for a second.

Head coach David McLaughlin noted that a big emphasis against Columbia was the emphasis on what he called “killshots”.

“Before the game, one of our staff wrote ‘kill shots’ on the board,” McLaughlin said. “When we are three or six, [we have to] do the next move then [the other team] can’t cut it to two or tie the game. We did a great job with killshots, taking the game from two possessions to three possessions and so on.

Dartmouth kept their foot on the gas, taking the lead to 16 with two minutes left in the game. The Big Green backed up their relentless offense with an equally solid defense – Columbia could only pick up seven points in the first seven minutes of the half. Dartmouth’s ability to take advantage of the Lions’ defensive breakdowns throughout the second half made it difficult for Columbia leading scorers Ike Nweke and Liam Murphy to lead the Lions into a comeback. The Big Green have won their first victory in the last four games and their second in the last 13.

“The bottom line is it’s more about us, we have to come together because we’re the ones out there,” Robinson said. “[Coach McLaughlin] can give us the perfect scouting report or whatever to help set up the game, but that’s up to us and making it our own. We know where we are and we’ve made some progress, but right now it’s about finishing the goal, finishing the game, finishing everything. After that, once we get into a rhythm, everything will reverse.

Saturday’s winning effort brought in a range of Big Green players, with four double-digit points. Rai was the star of the show, leading the team with 20 points, three steals and two assists. He was seemingly unstoppable in the second half, going a near-perfect 7-8 from the field for 18 of his 20 points. Wade added 11 points on the effort and Adelekun collected 12 while leading the team with six rebounds. Despite his early struggles, Barry found his stroke and scored 13 points.

The Big Green struggled to close close games throughout the season; Most recently, the team lost 60-59 to Harvard University on a missed buzzer-beater and 84-80 to Princeton last weekend. Coach McLaughlin stressed that one of the team’s main goals this week was to hold on through tough times and shut down games.

“We were able to finish this game,” Adelekun said. “A lot of times we lose the lead or are behind, but today we were able to get ahead and win. In terms of confidence, we lose a lot of games by a few points, so it’s a game changer. mindset of being good enough to play close matches with anyone when we can actually win.

“[This win] lets us know that we can use these previous games as lessons,” Adelekun said. “We now have the optimism and the experience to prepare for future games. I’m confident about the Yale game, if we can execute the game plan. I’m excited for the next road trip and hope that we can leave with big dubs.

The Big Green will be looking to continue their solid game and pick up another win when they take on Yale on Friday. The win over Columbia could prove to be the change of momentum Big Green needs to earn an Ivy League playoff berth as the team prepares to face a flood of tough conference opponents to close out the season.