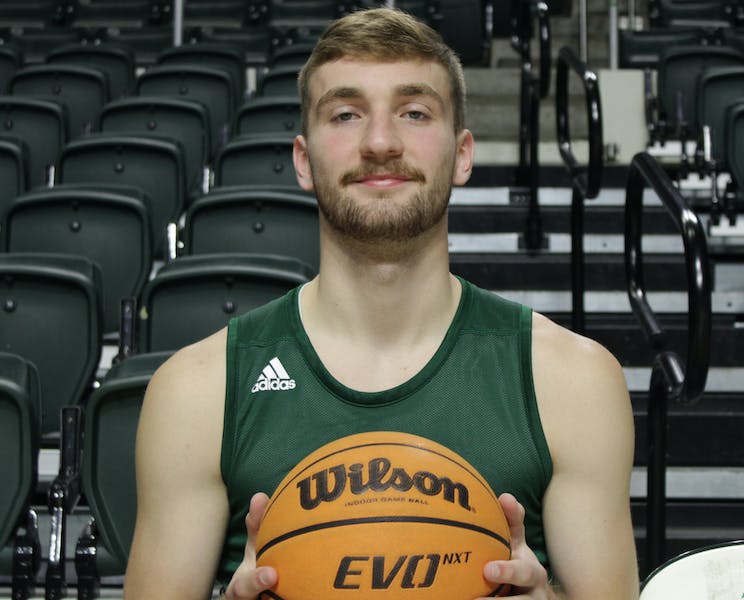 AJ Clayton is one of Ohio’s two veteran underclassmen. The sophomore played 34 games last season and had a positive impact on the field.

The second is now a starter for the Bobcats. He’s started in an exhibition against Capital and in both Ohio games so far. His size helps the Bobcats on defense, and he has nine defensive rebounds so far this season.

The post office chatted with Clayton about his goal of becoming a college or pro basketball coach, his love of peanut M&Ms and more.

The Post: Where is your favorite place on campus?

Clayton: My favorite place is probably Hangover Easy. I really like to eat there.

TP: (laughs) That’s where I went this morning with my friends. What do you usually get when you go there?

TP: Are you more sweet or savory?

TP: What is your favorite sweet food?

TP: What is your favorite?

Clayton: My favorite chocolate is peanut M&Ms. It’s my favorite candy. If I could have one candy for the rest of my life, this would be it.

TP: Have you ever been to one of those stores where they have all the candies and you can put them in big bags?

Clayton: Yeah, I don’t go to those often. I just get the bag of peanut M&Ms, or I get some other candy that I like.

TP: OK, so what is your major?

Clayton: I specialize in physical activity and sports coaching.

TP: I guess you would like to coach basketball. Do you have a dream place or level (to coach?)

Clayton: I want to coach at the college level or at the professional level. That’s what I want to do.

TP: Okay, cool. So, would you train children?

Clayton: I have experience with camps we run here and camps I’ve run myself. It is much more difficult, but I would do it a little.

TP: Good. Solder them with candies.

TP: So (in a coaching sense), what’s the best advice you’ve ever been given?

Clayton: (pause) I don’t even know. Probably (to be) adaptable to any situation I’ve been put in. That’s probably the best advice, it’s just being prepared for anything and it’s just being able to adapt.

TP: Speaking of adaptability, there are three AJ(ay) in the team now, you have an IJ (Ezuma), you have an Elmore James who could go through EJ and a DJ (Dwight Wilson III). How did you adapt to this?

Clayton: So we call Ajay Sheldon Shelly, or shell, which is what most of us usually call him. AJ Brown, most of us call him Anthony (or) a lot of people call him Jose. Then for me, it depends. A lot of people just call me Clayton or Slash get said a lot but most of the time if you say ‘AJ (ay) we all look… Coaches usually it’s first and last name they will say.

Clayton: It’s a nickname Coach (Jake) Ness came up with. Last year, just a little out of the blue, he said “we’ve got three AJ (ay) next year” and he said Slash. It’s just a bit stuck.