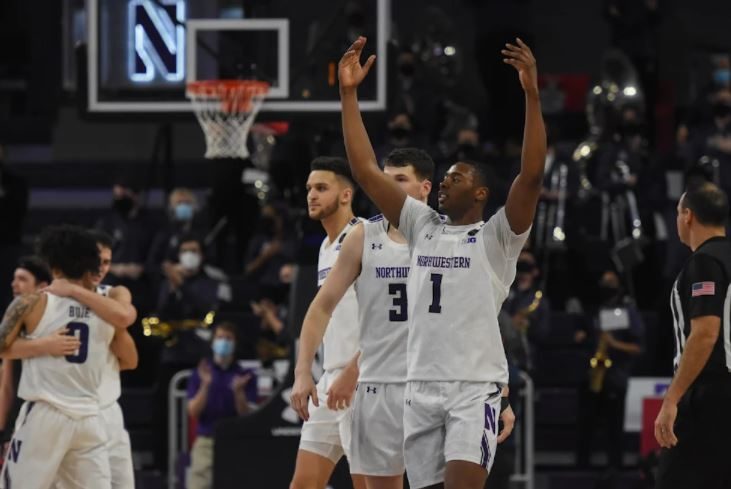 Northwestern falls short of No. 13 in Illinois

13 Illinois’ lead gradually narrowed from 18 points to 12, to nine, to three – like the thermometer on a cold February night.

It never evaporated though, and Northwestern’s three-game winning streak came to an abrupt halt in a 73-66 loss to the Fighting Illini on Sunday afternoon in Champaign.

Illinois led the Wildcats 53-35 with 1:05 to play after guard Alfonso Plummer sank one of five three-pointers in the afternoon. NU got back into the game thanks to their long-range shooting: sophomore guard Ty Berry hit a three, junior forward Robbie Beran knocked down one and Berry added another to make it an 11 game points midway through the second half.

To really make it a game, the Cats relied on an unlikely source: freshman guard Casey Simmons, who had seen little use coming, having played more than 10 minutes in a game on Jan. 5. His 13 minutes against the Fighting Illini were entirely limited to the second half, but the native of Milton, Mass. made them count.

A minute after the save, Simmons found Beran for the three-pointer that cut Illinois’ lead to 15. When two free throws from Berry brought NU to 55-46, Berry stole the ball and found Simmons for a layup on the fast break. Three minutes — and three steals from Simmons — later, the rookie dived and the once daunting Fighting Illini lead was 55-54.

Illinois got to work making sure the Cats wouldn’t come close. Fighting Illini center Kofi Cockburn kicked the ball in to cut the lead to three with 5:26 on the clock. When two free throws by junior redshirt guard Chase Audige made it a two-run game shortly after, Cockburn made a free throw and a layup to give Illinois a 61-56 cushion.

Meanwhile, senior striker Pete Nance spent an unusually long time on the bench in the second half, playing just eight minutes after halftime. NU seemed to miss Nance’s presence on the stretch, especially as Cockburn started to assert himself at both ends of the field.

The first half was all about Fighting Illini, as coach Brad Underwood’s team took a 44-30 lead. Illinois tried 16 threes in the first half and made nine, compared to four of 10 tries for the Cats.

Despite their spirited comeback attempt, NU never led and the game was never tied after Nance hit a jumper to level it 2-2 55 seconds into the game.

Simmons and Berry’s contributions were needed on an afternoon when the Cats’ most trusted contributors were struggling. Nance was 4-for-11 from the field, Audige 4-for-15 and junior guard Boo Buie 3-for-13. Beran made both of his field goal attempts but was fouled within 20 minutes.

For the Fighting Illini, Cockburn and Plummer each scored 19. Cockburn was particularly effective, making eight of his 11 shots from the field.

With their hopes of a berth in the NCAA Tournament as a whole fading fast, NU will meet No. 3 Purdue on Wednesday at home, hoping to avenge a blistering loss in the two teams’ first meeting.

— Men’s Basketball: The defensive battle ends with a victory for the North West against Indiana, 59-51