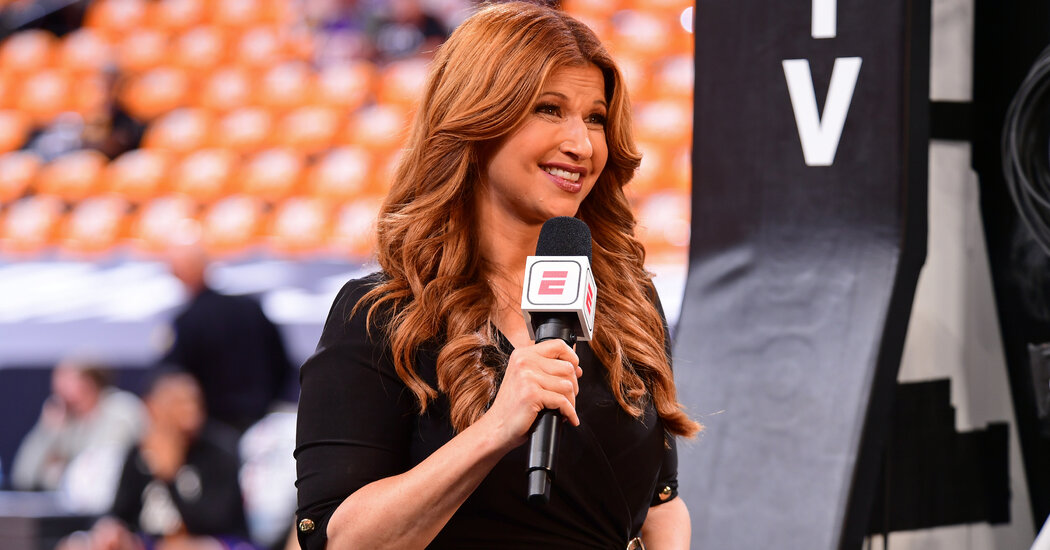 Rachel Nichols, who was slated to be ABC’s secondary reporter for the NBA Finals, will not play that role when Game 1 of the series kicks off Tuesday night, ESPN has reported. She will be replaced by Malika Andrews.

Nichols was the sideline reporter for the Finals last year and in ESPN’s most important NBA games this season. ABC and ESPN are both owned by Disney. â€œWe believe this is the best decision for everyone involved to stay focused on the NBA Finals,â€ ESPN said in a statement.

The decision to have Andrews as a secondary reporter came after The New York Times reported that Nichols, who is white, made disparaging comments about a black colleague, Maria Taylor, last year. Among other things, Nichols said Taylor was chosen to host coverage of the NBA Finals last season because ESPN “felt a pressure” on diversity.

The comments were accidentally captured by the camera and uploaded to a server at the company’s headquarters in Bristol, Connecticut, and then circulated widely among ESPN employees.

â€œI wish Maria Taylor all the success in the world – she covers football, she covers basketball,â€ Nichols said in July 2020. â€œIf you have to give her more things to do because you feel the pressure about your long-standing diversity record – which, by the way, I know personally from the female side – like, go ahead. Just find it somewhere else. You’re not going to find it at my house or take my thing.

There has been a lot of talk about the comments inside and outside ESPN over the past two days, including former employees and even NBA players. Memphis Grizzlies point guard Ja Morant tweeted in support of Maria Taylor, while some former high-level ESPN employees – including Dan Le Batard and Jemele Hill – discussed the issue on The Batard show Tuesday morning.

A sign of the scandal’s sprawling complexity, commentators have weighed in on many topics, including the discipline and management of ESPN, as well as the apparent friendship and professional relationship between Nichols and Adam Mendelsohn, the working political adviser and strategist. in close collaboration with LeBron James. Some have focused on the privacy issues involved with the recorded phone call. Others, in a discussion of white privilege and career advancement, raised that Nichols is linked by marriage to famous broadcast journalist Diane Sawyer and Oscar-winning director Mike Nichols.

Nichols hosted an episode of “The Jump” on Monday, and ESPN said earlier Tuesday that it would host the weekday show from the games’ sites throughout the finale. But although “The Jump” was on the TV shows to air on ESPN2 at 4 p.m. EST on Tuesday afternoon, the “Jalen & Jacoby” show aired instead.

Josh Krulewitz, a spokesperson for ESPN, did not respond to a request for comment on why the show was not aired.

Nichols, who has hosted “The Jump” since 2016, commented publicly on the recording and what she said about Taylor in Monday’s episode.

She kept her comments brief, saying she didn’t want to distract from the crescendo of the NBA season. But Nichols added that she “didn’t want to let this moment go by without saying how much I respect, how much I appreciate our colleagues here at ESPN, how deeply sorry I am for disappointing those I love. hurt, especially Maria Taylor, and how grateful I am to be a part of this amazing team.

She was joined on the show by Kendrick Perkins and Richard Jefferson, two former black NBA players who are regulars on “The Jump”. Perkins thanked Nichols for “taking responsibility” and added that he knows her heart and that she is a “great person, great person”. He also complimented Taylor.

Andrews, who is a first-time member of a playoff commentary team, is a former Times reporter.

Taylor will host episodes of ESPN’s pre-game and halftime show, “NBA Countdown,” during the finals. But if the final, between the Phoenix Suns and the Milwaukee Bucks, advances to a Game 7, ESPN could have a dilemma to resolve. Taylor’s contract with ESPN expires near the end of the finale, and as of this writing, the two sides aren’t close to a renewal.

The PBA family is now 95% vaccinated, hopes to open in July of season 46