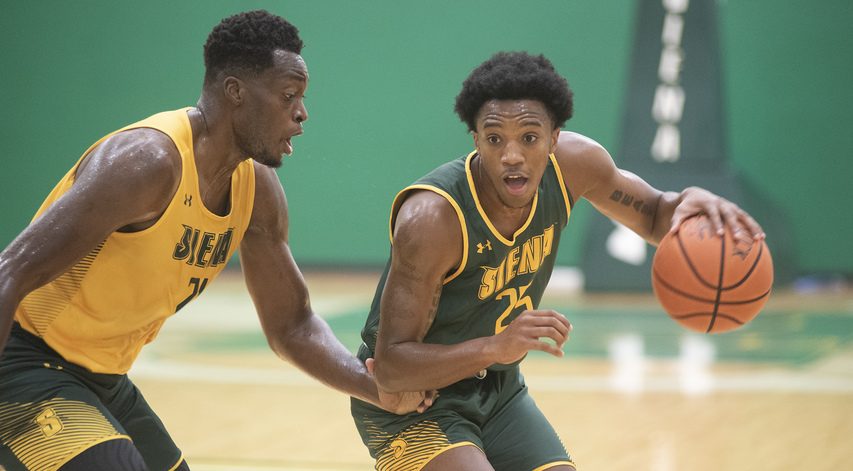 LOUDONVILLE – After an offseason of change, there are understandably questions about what to expect from Siena’s men’s basketball schedule this coming season.

“I think,” said Maciariello, “we have everything we need to win a championship.”

The Saints off-season has not been quiet. Only senior center Jackson Stormo remains in the team’s final as of five of the season, and 10 new players have joined a roster that brings in just 29.3% of his score from the 2020-21 campaign, which has saw the Saints win a share of the regular MAAC-season championship before losing to Iona in the MAAC quarterfinals. Meanwhile, Siena’s six-person coaching staff includes three new faces, as well as two comebacks – Greg Fahey and Matt Miner – in new roles for the Maciariello program.

Among the departures from Siena’s roster are first-team All-MAAC selections Manny Camper and Jalen Pickett, the former now pursuing professional opportunities and the latter playing for Penn State. The same goes for each of the three assistant coaches from last season.

But Maciariello has always expressed confidence in the way the Saints have rebuilt themselves this offseason with a mix of freshmen and transfers, and has already compared his current squad on several occasions to the Siena 2019-20 squad. who have won their last 10 games and behaved with confidence. aura that last season’s Saints never quite got.

â€œThese guys are all determined to get better every day,â€ said Maciariello.

Anthony Gaines and Stormo echoed that sentiment. Stormo is Siena’s top scorer and returning rebounder after averaging 10.8 points and 5.5 rebounds in 25.2 minutes per game last season, while Gaines – a transfer from the Northwest – is the one of the many newcomers who should be playing major minutes right away.

Monday’s practice lasted around 90 minutes, and â€œsetting the tone for the season,â€ said Gaines, was the most important thing to accomplish.

â€œThe guys come in, work hard, ready to compete every day, push each other, get the best of themselves,â€ said Gaines. â€œThat’s what winning programs do.

The attitude around the team, Stormo said, is positive. Stormo said not all offseason starts to the schedule weigh on the Saints.

â€œEveryone who is here is here because they really want to be here. It’s the only thing that’s really clear, â€Stormo said. “[Some] people are elsewhere and we wish them the best, but I’m really focused on what we have here, right now, in this dressing room today – and we have something really special.

The Saints did so in practice on Monday, their first official of a 2021-22 season that begins with a game on November 9 in Saint-Bonaventure. The squad was made up of fewer than a few players, as freshmen Javian McCollum and Taihland Owens, and senior Jayce Johnson missed practice due to injuries. Meanwhile, Andrew Platek – a former Guilderland High School star who played four seasons in North Carolina – remains enrolled in Siena, but has yet to be added to the program roster.

The Saints in the field on Monday demonstrated reasons for optimism. Aidan Carpenter, coming out of a freshman season that saw him show flashes of his potential, looked like a player who took the offseason seriously as he added 10 pounds to his 6-foot-5 frame. inches and now weighs 195. After taking just two 3-pointers last season, Stormo has made several consecutive 3s in one drill. Overall, the Saints’ athleticism appeared to have increased by a level compared to last season.

Above all, Maciariello has said that the â€œcharacterâ€ of this season’s squad is what he loves. It’s a team with more courage than flash, and one that Maciariello – a former student of Siena – could have fitted in as a player.

“They’re my kind of guy,” said Maciariello, who signed a contract extension in the offseason after guiding the Saints to regular season championships in each of his first two seasons at the helm.

Maciariello has named four captains for the Saints 2021-22, the schedule announced on Monday.

Graduate students Gaines and Nick Hopkins, and seniors Robert Mahala and Stormo will be part of the Saints leadership team.

Mahala – a replacement – was also captain last season, along with Camper, who won the MAAC Player of the Year award as a senior.

Siena announced Monday the addition of Aidan Dagostino, from Saratoga Springs, to its program.

A 6-1, 147-pound goalie, Dagostino has joined the Saints roster as a walk-in player.

Dagostino graduated from Saratoga Springs in 2020 and then played for a year at South Kent School in Connecticut.

More from The Daily Gazette: