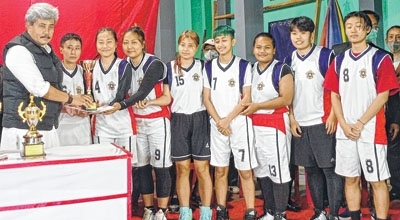 
By our journalist
IMPHAL, December 5: YPHU, Lalambung and St Anthony were crowned male and female champions of the Manipur Basketball Association’s Senior State Basketball Championship hosted by the Manipur Basketball Association at Brahmapur Nahabam Basketball Court.
YPHU beat SRWC 90-72 to win the men’s title in a high-scoring encounter today as Ch Tutu scored the most 28 points and Kemlin had 26 points. Nikash also collected 16 points for YPHU followed by Borish (9), Lubert (5), Marshal (4) and Ozzy (2).
Meanwhile, Markan scored for the SRWC with 23 points while Pinku and Vishal added 19 and 18 points respectively.
Viking (5), Romen (4), Lukus (2) and Victor (1) also find their names on the SRWC scoresheet.
In the women’s final, St Anthony rolled 13 points each scored by Chonchon and Leishimi to climb to a 36-21 victory over ESU. Caroline (4), Deborah (2), Meppi (3) and Hiron (1) also scored it for the winning team while Omega (11), Janat Sahany (5), Revela Leivon (3) and Luxmi Aribam (2) have scored. for ESU.
The farewell ceremony of the championship took place in the presence of the Minister of CAF and PD, Th Satyabrata; former international basketball player and owner of The Sangai Express, Nishikant Singh Sapam; Heirok AC MLA and President of the Manipur Olympic Association, Th Radheshyam as dignitaries who also celebrated the team champions, finalists and individual winners.