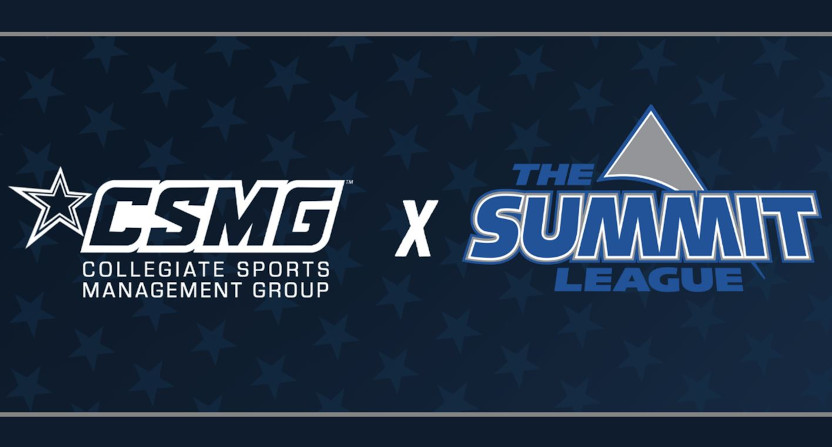 In many recent NCAA media rights discussions, we have seen a greater emphasis on the idea of ​​conferences working with various external partners on media rights strategies and agreements. It’s not always about teaming up directly with networks or streaming partners, but also working with companies that can help design broader strategies, connect conferences with particular media companies that might agree, and even help negotiate, what possible deals look like. One notable company growing in this space is Collegiate Sports Management Group. On Tuesday, it announced its eighth Division I partnership, this time with the Summit League. Here’s more about it from a release:

The Summit League today announced that Collegiate Sports Management Group (CSMG) will represent them exclusively to play a key strategic role in the formulation of their conference media rights strategy under new Commissioner Josh Fenton.

… “The Summit League is continually focused on improving experiences and connectivity with our student-athletes and passionate fans,” Fenton said. “We look forward to working with trusted leaders at CSMG in a media rights assessment process with the goal of providing broader exposure to the successes of Summit League student-athletes, while building affinity for fans with our students, alumni and dedicated fans.

The partnership with The Summit League marks the eighth Division I conference to partner with CSMG, which is entrenched in the management, acquisition and development of intellectual property rights through media rights, name, Likeness and Likeness (NIL), review services, licensing and sponsorship. Sales. CSMG also operates ESPORTSU, focused on uniting the collegiate esports community through original content and events, including the Collegiate Esports Commissioner’s Cup (CECC).

“CSMG is thrilled to partner with the Summit League, home to great institutions and one of the best college basketball tournament atmospheres in the country,” said Ray Katz, Co-Founder and COO. of CSMG. “With the ever-changing academic landscape and an outlook for the future, we are confident that we will pursue a winning media rights strategy in terms of revenue and exposure on behalf of this exceptional conference.”

Collegiate Sports Management Group is an integrated sports media and entertainment company. According to their website, “The focus of our business lines – CSMG and ESPORTSU – is rooted in the management, acquisition and development of intellectual property rights through media rights, name, image and likeness (NIL), appraisal services, licensing and sponsorship sales. “Co-founders Katz and Michael Schreck have significant experience negotiating media deals in college sports and beyond. Their other Division I partners include the ASUN Conference, Big Sky Conference, Colonial Athletic Association, Horizon League, Northeastern Conference, and Southern Conference.

The Summit League’s current Tier 1 media rights deal is with ESPN, with most games streamed on ESPN+ (they were early adopters there, with their games among those included when this service was launched in 2018). They also have a Tier 2 deal with cable company Midco. Fenton, who officially took over as commissioner of the Summit League last April after serving as commissioner of the National College Hockey Conference for nine years, had some interesting things to say about his media strategy in a March 2021 interview with Mike McFeely from The Fargo-Moorhead Forum:

Q: One of your major accomplishments with NCHC was the creation of NCHC.tv, a digital network. Could there be a SummitLeague.tv to get the whole league in one place digitally?

A: “Yes, in terms of possibility. How it comes together is perhaps another thing. We have a level 1 relationship with ESPN, obviously a great media partnership. ESPN is very powerful across the country. As part of that relationship, we have a smaller linear component – ​​they’ll be here for league games on Tuesday night. And then we have a digital component through ESPN+. But not everything is pushed to ESPN+, so we can’t consider that the digital home of the Summit League, so to speak. Then we have an excellent secondary partnership with Midco.

“We have to try to understand where we are going with the overall media landscape. Can we do something linear nationally? Regionally linear? And maybe we’ve found a sweet spot with Midco. Finally, in combination with the linear side, is the digital component. I’m not naive enough to believe that we’re going to have every Summit League game on an ESPN linear channel, because that’s just not going to happen. So we need to be able to provide a digital option that makes sense to fans. The most important thing for me is that we have to find a way to organize it and aggregate it in a way that favors the fan base. Not just the NDSU fanbase, but the Oral Roberts fanbase and everyone else. I believe the way to do that is to bundle rights and put something together collectively.

… Q: I heard Matt Larsen, the athletic director of NDSU, say on the radio the other day in Fargo that he would like to see the Summit League, as you mentioned, get some kind of linear television contract national, even if it’s for a Summit League game of the week or something. The other thing he mentioned was a planning alliance with another mid-major conference to maybe increase the league’s NET ranking, get some consistency there. Are these possibilities?

A: “So on the television side, that’s where the members, and that’s where we’re at the very beginning of our discussions, have to come together and say, ‘What’s the more important to us?’ There is a financial aspect to that, there is an aspect of exposure and then there is perhaps an impact on certain local partners. For NDSU, is there an impact on WDAY? So we will have to understand that and the members will have to understand what is most important. Are these things possible? Of course they are possible. Are they snappy and easy? No they are not. Distributors, world ESPNs and others, are in the business of ratings. And so one of the things we need to do, going back to one of your previous questions, is to raise the profile of the Summit League, to improve the competitiveness of the Summit League programs, so that it becomes more appealing to linear TV channels. You can’t just walk in and say, “Hey, XYZ TV Entity, we want to be on a game of the week. They’re not just going to give it to you. You must provide the value. I think we have value, but I think we need to increase our added value. These are conversations we’ll be having with ESPN and potentially others.

And these are now conversations that the CSMG will help the Summit League with. We’ll see what that means for their media rights.

Back to reality: filming begins before the launch of the Asian league