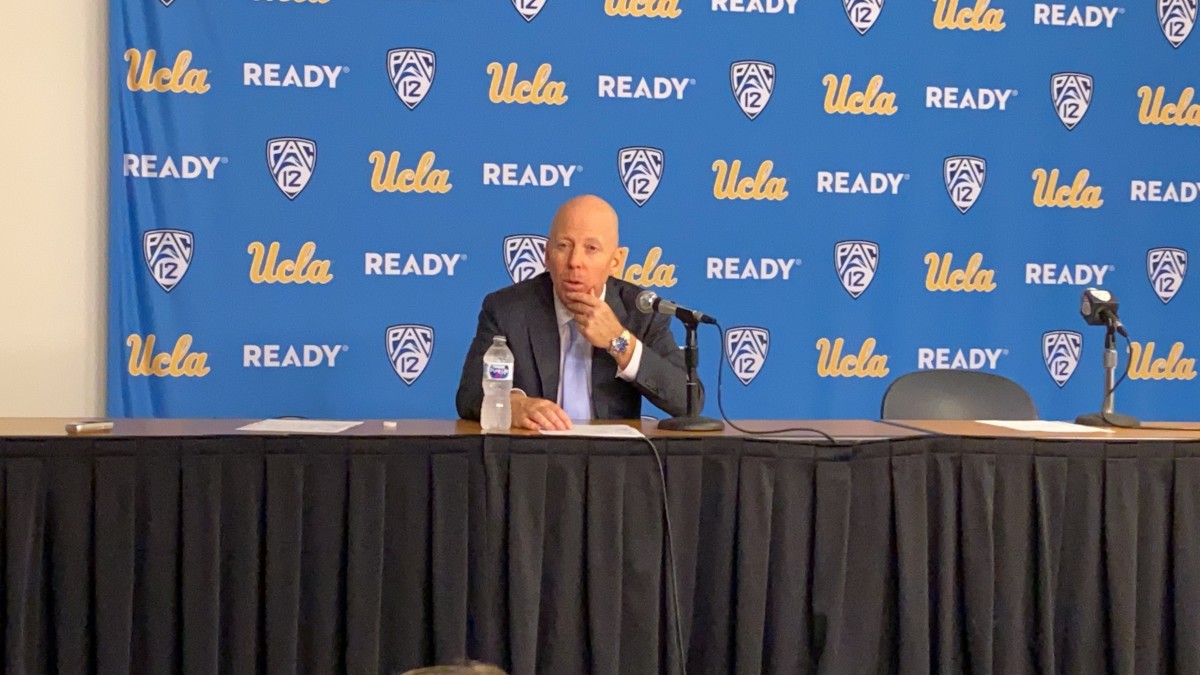 UCLA men’s basketball coach Mick Cronin spoke to reporters about the Bruins’ 73-61 victory over Colorado on Wednesday, including the status of guard / forward Jaime Jaquez Jr., the story of two halves defensively and the importance of guard Tyger Campbell in attack.

All of our doctors did all the work, they actually cleared him but I just wasn’t comfortable. I had to bring Mike Lewis out to watch him warm up and I’m always going to err on the side of safety when it comes to my players so I didn’t feel comfortable with that, win, lose or do draw. It’s your job as a coach. Sometimes you have to save the players from themselves. You know that kid was running through a wall – and he says he’s fine, he passed all the concussion tests and stuff, but he fell pretty hard on his head, so sometimes that thing takes a while the symptoms may appear two or three hours later, so I thought it was the right thing to do. Every once in a while I do something right.

Yes. Well, he’s got 12 points, 10 rebounds, and 14 deflections, so he’s got a UCLA triple-double. What I told him is that’s what I want to see in every game, so for him to be included in the offense and have things to ask him, I think he’s been a guy. so nice his whole career, people kind of accepted who he was and my post for him was coming in here, you know i don’t accept that from any of my players. I came here to try to win a championship and I want every guy to become a better player and do the NBA or play in Europe or do whatever he wants, so he’s pushed around every turn like he’s never been. done before.

Did he run and he answered?

Now, he’s got to do that and the same with him. See, I saw this guy in training. Now part of their strategy was to force him to be a shooter, that was their game plan. I’m not telling you any secrets, it was very clear that this was their game plan and I love that he didn’t even think twice about it because in order for us to become the team we can become, we make everybody healthy, we get Peyton’s confidence goes, you know Tyger has to be a guy capable of that and if you got that game plan he’ll just go get 21. I got it. accepted that he was a young player for two years, grooming him, giving his best effort, but not anymore. He has to try to be one of the best players, he has to take it personally. Like, what happened in the Gonzaga game in this game can’t happen, not for us to be who we want to be.

Working with Myles is an ongoing challenge?

Ah, every day. But you know Rome wasn’t built in a day, so today you saw the culmination of a lot of hard work. You know, Darren Savino should have been a head coach three years ago when I left Cincinnati. He should have gotten this job. Now Wes Miller is my friend and I do all I can to help advise him and I only want the best for him but Darren is as good as he is. He’s got nothing to do as an assistant, he does an amazing job developing players, so you see a lot of his work with Myles paying off.

Continuation of the defensive effort against UNLV?

Well, in the first half. In the second half, we allowed 38 points. Now obviously they have good players, Colorado is trained well as a team, but Tad is going to ask for a time out and he is going to try to adjust, he was big, he got small, obviously no Jaime , we are playing makeshift lineups but we are improving defensively. We’re not there yet, I think Johnny and Tyger have played too many minutes, and it’s new for Myles, playing 28 for him. I think in order for us to be defensive we probably have to play against nobody over 30. Guys are getting tired, that’s what’s happening. You see what’s going on on the defensive side.

Second unit in the first half?

Yeah, I thought that was a big part of why we were able to put the run on them, keep trying to push the ball, keep trying to use our bench. Jaylen Clark has done a lot of good things, he’s doing a lot of things that aren’t on the stats sheet. It’s just a process, Peyton is still a young man, looks attractive sometimes. He just wants to do so well, so badly, to help his team. Trying to find Jake, he has five minutes tonight, trying to find him is difficult with Dave and Johnny. But I think in the future, in order for us to be who we need to be, it’s hard to have guys who play that many minutes and are really, really good defensively, but that’s probably an excuse. I can give Colorado credit, they didn’t give up, I thought Tad made a good fit

Glad to see you are doing well defensively in the first half without Cody Riley?

Oh yes. Well, first of all, if we can get away with it and get Cody back with just one loss, I’ll take that. And if you told me we were going to beat Colorado by 12 and Jaime has no points and no rebounds and gets knocked to the ground, I would have taken this. But I think it makes you better. If we can get out of it that would be great, I think that’s obviously going to help the development of Myles and Kenny. Jaime not playing tonight wasn’t good for my blood pressure or my heart, but it was good for Peyton, Jaylen Clark, these guys to gain experience. I think it makes you better. I’m trying to keep an eye on who we need to be in March.

Well, he actually said he was fine. And I sent Mike – Lewis – to shoot with him and get him to move a bit, and Mike came over and said, ‘You know him, he wants to play, I don’t think he looks like 100 %. ‘ That’s all I needed to hear, because I told Mike if he doesn’t sound good, tell me. So I told TJ Wolf not to put the starting XI until Mike gives me the word on Jaime.

It’s a shame. It seems to be becoming a problem, I see a lot of NBA guys dealing with it. It’s unfortunate we all have to be careful everyone gets their extra shot do whatever you can. Even though we all want to move on, I just – I said it the other day I was talking to my dad in Cincinnati because I kept seeing NBA guys popping up, these guys are all vaccinated. It’s just … it’s a concern. So I don’t know what the protocol is, since Pac-12 Media Day, supposedly it was going to be a package, but I don’t know if I’m right, to be honest with you I’m ‘I’m going to have to to verify. So I don’t know where it is. I know we would need to play because we wouldn’t play before Marquette because we have finals so it would be a long break for us. But then again, when it comes to that sort of thing, you just hope all of their guys are doing well, their coaches. I obviously know what you just told me, someone mentioned it on entering. I just hope this doesn’t turn out to be a – as far as the COVID stuff goes, pray everyone is okay, hope this doesn’t turn into a huge problem, right, for everyone. sports. You know, it’s hard.